how to create your own protocol implementation

As of mountebank 2.0.0, you can create your own protocol implementation in the language of your choice. You do not have to change the mountebank source code to do so. You can see a fully worked example at mountebank-http.

In mountebank land, a protocol has the following responsibilities:

The sequence diagram below -- thanks to Max Ludwig -- shows the general idea (without proxying): 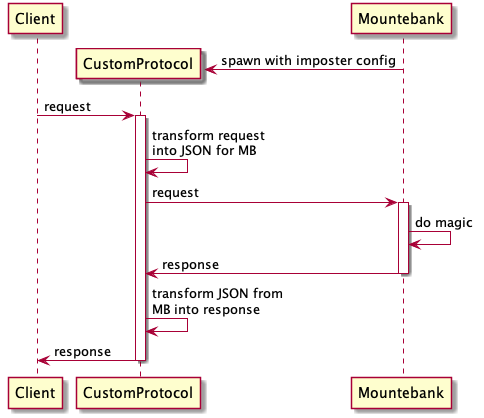 To inform mountebank of your custom protocol, you create a protocols configuration file. By default, this will be called "protocols.json" and is expected to reside in the working directory you start mb in. You can change it with the --protofile command line flag. The following configuration would override mountebank's built-in http protocol with a custom implementation and add a new protocol called "foo". Start by adding the following to "protocols.json":

You could run this with the following command:

The most important field is the createCommand, which tells mountebank the command line information needed to start a new instance of the protocol. As far as mountebank is concerned, it's just a shell command. That gives you enormous flexibility in how you implement it.

The other two fields are optional and used for validation. When a new imposter is created, mountebank performs a dry run of the creation, testing all predicates and responses to make sure none of them return an error. The testRequest and testProxyResponse fields should model the protocol-specific request and response format, which will be used during the dry run. Adding them makes that validation more robust.

When spinning up an imposter, mountebank will call the createCommand, passing a JSON string as an additional parameter. When parsed into JSON, the object will contain the following fields:

After you parse the JSON object, you spin up your server, listening on the provided socket. As soon as you write anything to stdout, mountebank assumes you have finished initializing.

When a network request comes in, you translate it to a simplified JSON format and wrap that inside an object with a top-level "request" key. For example, the following could represent a messaging protocol with custom request fields for the message and transactionId:

The next step is to POST that body to the callbackURLTemplate (with ":port" replaced with the actual server port if you changed it). Mountebank will respond with one of the three following responses:

Mountebank was able to determine the correct JSON response to use. The POST response looks something like this:

All you have to do is to merge in the missing fields from the defaultResponse, and translate the JSON to a network response.

If mountebank determines you need to proxy to fulfill the response, it will send a payload that looks something like this:

Your job at this point is to forward the request on to the given proxy configuration. This requires you to translate the JSON request into a network request to the proxy, and translate the captured network response into a JSON object. Then you POST the JSON response to the provided callbackURL. Mountebank will return you a standard response as shown above. Mountebank will be responsible for saving the proxy responses; you do not need to worry about it.

In such scenarios, it is recommended that you kill the connection rather than return an error. Mountebank will not return you a response.

Every message you write to stdout that begins with one of {debug, info, warn, error} will be written to the mountebank log. While not strictly necessary, you can optimize the writes with the loglevel parameter. The following creates a log function in JavaScript:

If you exit before writing to stdout, exit with a non-zero exit code. The user will get a 400 error.